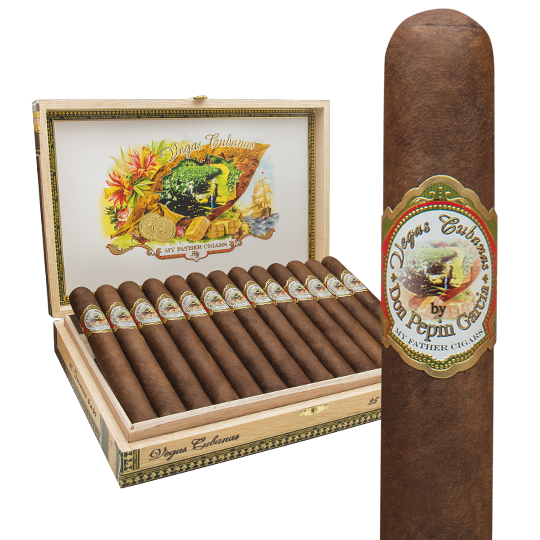 After not being produced for some time….This amazing cigar has returned in all its splendor.

My Father Cigars, Inc. will once again be offering Vegas Cubanas to retailers nationwide. It was one of the first brands created by José “Pepín” García when he started making cigars under his own name in 2003. As the company’s portfolio grew with brands like Don Pepín García, Serie JJ, My Father, Jaime Garcia Reserva Especial and Flor de las Antillas, Vegas Cubanas was largely phased out.

There are two small changes. It is now being produced at My Father Cigars, S.A. in Estelí, Nicaragua. In addition, the packaging has been updated a bit compared to the artwork that adorned the cigar when it was first introduced. The bottom of the artwork on both the band and box now reads My Father Cigars, a company that didn’t exist when the cigar was first introduced.

Vegas Cubanas uses Nicaraguan fillers grown in Estelí and Jalapa and a corojo wrapper, though the company is not specifying which country the wrapper came from.

The line is still offered in six sizes:

CLICK HERE and head over to the store and grab yours today!