Both are reissues from previous years, both have barber pole designs, and both are offered in a single 6 x 50 toro vitola. The Alec Bradley Black Market Filthy Hooligan uses two wrapper leaves, a Nicaraguan leaf from Jalapa and a candela leaf from undisclosed origin. Underneath those are an Ecuadorian Sumatra binder and fillers from Honduras and Panama.  Only 2,000 boxes produced, meaning 44,000 total cigars.

The Alec Bradley Shamrock features three different wrappers: a Honduran candela, a Nicaraguan habano maduro and a Nicaraguan habano. Like with the Filthy Hooligan, the Shamrock uses an Ecuadorian Sumatra binder and fillers from Honduras and Panama.  1,500 boxes of 10 cigars, a total run of 15,000 cigars.

Both cigars are made in Honduras at Plasencia’s Tabacos de Oriente S.A. factory. The Filthy Hooligan debuted in 2013 and was originally a candela before going to its barber pole design in 2016. The Shamrock debuted in 2018. 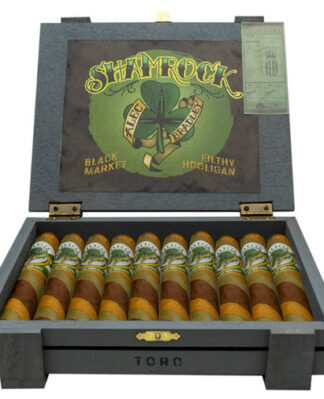