“The seed for a mareva-sized cigar was planted for me last year when our national sales manager, Miguel Schoedel, gifted me a Romeo y Julieta Cedros de Luxe No. 3,” said Jon Huber, Co-founder of Crowned Heads, in a press release. “For my palate, that cigar exhibited so much depth and complexity with impeccable balance while in a smaller-cigar format; it still stands out in my sensory memory. We began work on a Mil Días Mareva even before we began shipping the first Mil Días boxes, as I knew in my gut that this blend would translate brilliantly in a Marvea vitola.”

Like the rest of the line, it uses an Ecuadorian habano wrapper over a Nicaraguan binder and fillers from Costa Rica, Nicaragua and Peru. 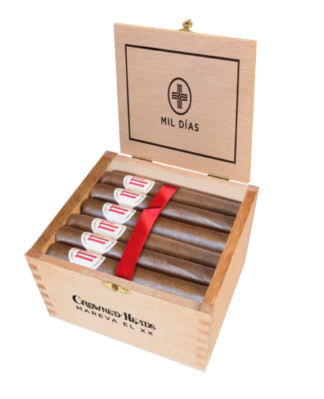