Cuban cigars became famous mostly for their great tasting and potent native wrapper leaf called Corojo. Because Cuba could not produce enough Corojo leaf to meet production targets, they looked elsewhere to grow the Corojo wrapper. Tobacco producers experimented outside of Cuba trying to grow Corojo in Ecuador and Honduras while Habanos started testing alternative wrappers.
Ecuador has demonstrated an ability, through technology and climate to replicate some of the finest wrapper in the world. In some cases, the Connecticut Shade coming out of Ecuador today is better than that of Connecticut. An experimental crop of Corojo was harvested in 1996 and, while intended for Cuba, we were fortunate enough to taste it — and WOW. We purchased the entire crop (enough to wrap one million cigars) and have created Cusano Corojo – 1996 vintage. The Corojo wrapper leaf grown in Ecuador has none of the problems that are found in the Cuban (susceptibility to disease) or the Honduran grown Corojo. We feel the Ecuadorian grown Corojo has a better burn than the Honduran grown Corojo (which is a much heavier leaf).
By integrating our strongest Dominican filler and binder, Cusano’s Corojo is multidimensional and offers a potent, well-rounded flavor. Be careful, like Cubans, this cigar may make you dizzy while tantalizing your entire palette.
Cusano Corojo is “Pro Cigar Certified” as original Corojo – Vintage 1996 and is one the highest quality cigars produced in the Dominican Republic today. 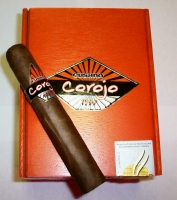