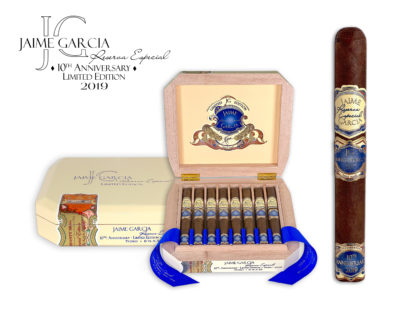 Jaime Garcia Reserva Especial 10th Anniversary is covered in a Connecticut broadleaf wrapper over Nicaraguan binder and filler tobaccos. The cigar is billed as full-bodied by the company, and unlike the original Reserva Especial, the 10th Anniversary contains Pelo d’Oro tobacco in the filler, a varietal that’s known for its strength and sweetness.

Celebrating a 10-year milestone with the release of Jaime Garcia Reserva Especial 10th Anniversary Limited Edition 2019, the 6 1/2 inch by 52 ring gauge toro made at the My Father Cigars factory in Nicaragua. The cigar is named after Jaime Garcia, the son behind the father, son and daughter team at My Father Cigars