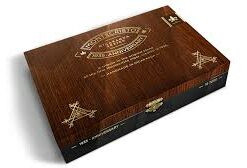 The Montecristo brand turns 85 this year and Altadis U.S.A. is celebrating the milestone with the Montecristo 1935 Anniversary Nicaragua, a softly-pressed line of cigars made entirely from Nicaraguan tobaccos.

“To honor the age-old tradition of soft-pressing cigars, the Montecristo 1935 Anniversary Nicaragua will be introduced as a soft-pressed series of four sizes,” said Rafael Nodal, head of product capability for Tabacalera USA, Altadis’ parent company. These soft-pressed cigars do not have the sharp angles and defined corners of trunk-pressed cigars (which are formed in slotted wooden trays), but are not completely round, either. Rather, the cigars look as though they were traditionally box-pressed—a method where round cigars are packed tightly into their own dress boxes and then compacted by a hand press. The result is a squarish appearance. Made by A.J. Fernandez at his San Lotano factory in Ocotál, Nicaragua, Montecristo 1935 Anniversary Nicaragua is composed of tobacco grown by Fernandez