“Punch Bento Box.” All three cigars are part of General’s “Year of the Zodiac” releases, cigars that were released in 2019, 2020, and 2021 to coincide with the lunar new year.

Somewhat confusingly, all three of those cigars were named after various American Chinese food dishes—Chop Suey, Egg Roll, and Kung Pow!—while bento box is a staple of Japanese culture, a pre-packed meal that usually contains a variety of items in a neatly divided container. Many Japanese pack their own bento boxes or purchase one from a store for lunch each day.

The cigars are all part of a series but they do not share the same blends. In fact, they aren’t even made in the same factories Chop Suey was made at General Cigar Dominicana while the other two were produced at STG Danlí.

“Just like a true Bento Box that hits all of the major food groups in one package, our version brings together all of our Zodiac releases in one creative and great looking box,” said Ed Lahmann, senior brand manager for Punch, in a press release. “Each of our Zodiac releases were fast sell-outs at retail, due to their fantastic blends and incredible value. Bento Box is being released in a very limited quantity, so they’re sure to be gone in a flash from cigar shops.”

All three were limited edition releases, General said it made roughly 75,000-90,000 cigars per release when they were originally sold. As for the cigars released in the Punch Bento Box, these are new production cigars that were rolled just for this sampler. A spokesperson for General Cigar Co. declined to say how many Bento Box samplers were made. 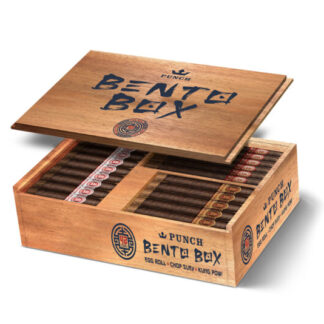